”Väsen” four new permanent installations with sonic art is premiered in a new park for the large-scale housing and society exhibition (and a future part of the city) Vallastaden Expo.

Väsen is situated in the park ”Paradiset” located in Vallastaden and is inspired from old Scandinavian folklore, producing sounds from imagined entities living in the park, but also inspired from sounds and music relating to Linköping as a city. 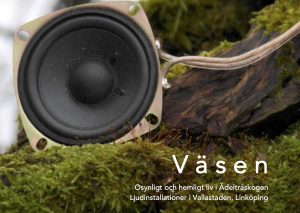