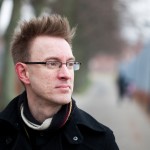 Stefan Klaverdal is one of the most active sound artists and composers in his generation in Sweden, and he is widely performed all over the world. His music is described as being kaleidoscopic with a dramatic quality, yet lyrical and beautiful.

Klaverdal composes music for a large variation of ensembles, but specialize in vocal and electronic music as well as unconventional settings like in opera or performance art. The music is frequently performed and has won several prizes, such as the prestigious IMEB in Bourges. In 2012 he received the Prince Eugen Cultural Prize from the Swedish and Norwegian states for his interdisciplinary and innovative work. In 2014 he was awarded “composer of the year” by Bergslagen Symphonic orchestra.

Sound art by Klaverdal is in some cases performance-oriented, like in collaboration with performance artist Lisa Hansson, but mostly he works with computer-interactive installations. During 2016-17 he was artist-in-residence at the hospital of Ängelholm, the first ever such arrangement in Sweden.

As a teacher and producer, Klaverdal has curated several festivals and exhibitions, mostly in Malmö, but also in other places in Sweden. One example is the large music, sound art and textile festival  “Textile Sounds” in Borås, Sweden in 2014. He is currently programming the music content of Cultural house Ravinen.
He used to teach for 15 years at the Malmö Academy of Music and he also teaches sound art at Malmö Art Academy frequently since 2002.
Currently Klaverdal is working as a church musician.

The Press has described Stefan Klaverdals music as passionate and dramatic, expressive and suggestive, kaleidoscopic and very beautiful. He frequently combines both disparate musical material and acoustical and electronic instruments to create a very unique, rich musical world. Stefan Klaverdal explains that, being a singer himself, he searches for the lyrical and human aspects of music. This may seem like a contradiction when you look upon the number of pieces with electronics, but he regards the electronic component as being an extension of his own voice.

Swedish composer and sound artist working with acoustic and electronic music, performance and interactive sound art. His music is described as emotional, kaleidoscopic and beautiful.